Bangkok (BKK) is locally known as Krung Thep, or “City of Angels” (no clue where Chow came up with ‘Squala’). During my short time in this massive city I’m not sure I saw too many ‘angelic’ things though. Maybe I was unlucky with Tuk Tuk drivers I approached or I just happened to take the wrong route to Royal Palace littered with scammers but experiences like those left me with mixed reviews. Take that as you will as you read this post…

Similar to Taipei, go direct to the official taxi line upon arrival. Since it’s a meter taxi you’ll be pleasantly surprised by how cheap the ride is. You will not be pleasantly surprised, however, to find out nothing in BKK is a quick drive away and some red lights can last as long as 5 minutes (not an exaggeration)… After a week of staying in party hostels, Nathan and I decided to ‘splurge’ and stayed at the Shangri La. It’s a 5 star hotel and only cost us about $140/person for the two nights. Expensive relative to Southeast Asia but not America… We’ll take it.

Our first meal in BKK was at the Home Cuisine Islamic Restaurant. The name is misleading as it’s actually a combination of Indian and Thai food but regardless, if you can find it hidden behind the vines you will be in for some good, fresh eats.

We decided to save the sites for day 2 so after lunch we walked up the well-known street Silom, which takes you directly into Lumpini Park. If you are as lucky as we were, you just may catch an outdoor workout class in Lumpini. I got to hand it to the locals for busting moves in 90% humidity and 85 degree weather.

For dinner that night, we mustered the courage for Chinatown street food. If there are any animal rights activists out there, just know I had no idea what I was eating until halfway through the meal but turns out shark soup is very popular in Chinatown. I think in this picture I was trying to decide whether to finish the meal or throw in the towel after finding out the contents of my bowl. It didn’t help that rats and cockroaches were creeping all around on the street but I finished the bowl… Can’t let food go to waste, right? Anyways, that’s what my antibiotics and Pepto-Bismol chewables are for.

Day 2 was an ambitious day for our group and it started by boating from Shangri La up to the main attractions. Ignore people trying to sell you other tickets for a ferry and grab the main one. Shouldn’t cost more than a few bucks for a one-way. Upon arrival at Pier 8 we went straight into What Pho to see the Reclining Buddha (definitely worth the visit).

After Reclining Buddha we made our way to the Grand Palace and that’s where my impression of Bangkok continued to decline. Luckily I had heard about the scams I was about to be faced with. It’s a 15 minute walk to the Grand Palace since there’s only one entrance and it’s opposite of What Pho (one of many bonehead engineering decisions I noticed). Along the way you will encounter people who try to sell you a tour around the city. Our dude went with the angle that open-toed shoes are not allowed (not true) and neither are shorts (true but you can get free ones inside). Once they have you thinking you won’t be able to get into the palace they will offer to drive you to other “great” temples around the city. What ends up happening is they take to one, maybe two, then they stop in front of a store (usually a suit shop). From there someone will try to sell you a suit and so on. Be an a$$hole if you need to and go straight to the front entrance to find out the real deal on attire and other visiting requirements.   Maybe it was our incessant scammer or the blistering heat but the Grand Palace left me feeling ‘meh’. Sure there are some beautiful temples but you can’t actually enter the main Grand Palace. And if you go mid-afternoon, you will be swarmed and bothered by other tourist groups. So plan accordingly. 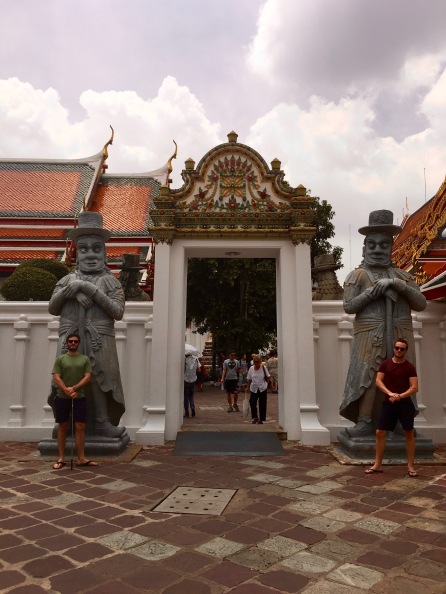 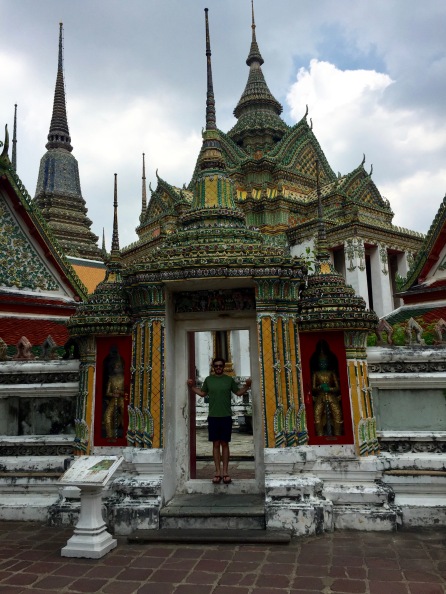 One of the many beautiful temples within Royal Palace

After a few beers to cool down, we headed to the nearby Thip Samai. Without a doubt the best Pad Thai I have ever tried. Their orange juice is also something to write home about.

For the night activities, we began by going to the Sky Bar rooftop at Lebua State Tower. The views are easily worth the Manhattan-priced drinks. We attempted to recreate the scene from Hangover II but the security guard on the steps was not having it.

What’s a visit to Thailand without watching some Muay Thai?  Granted our show wasn’t exactly the local boxing match we had in mind but we got good pictures and witnessed two, what seemed authentic, matches. 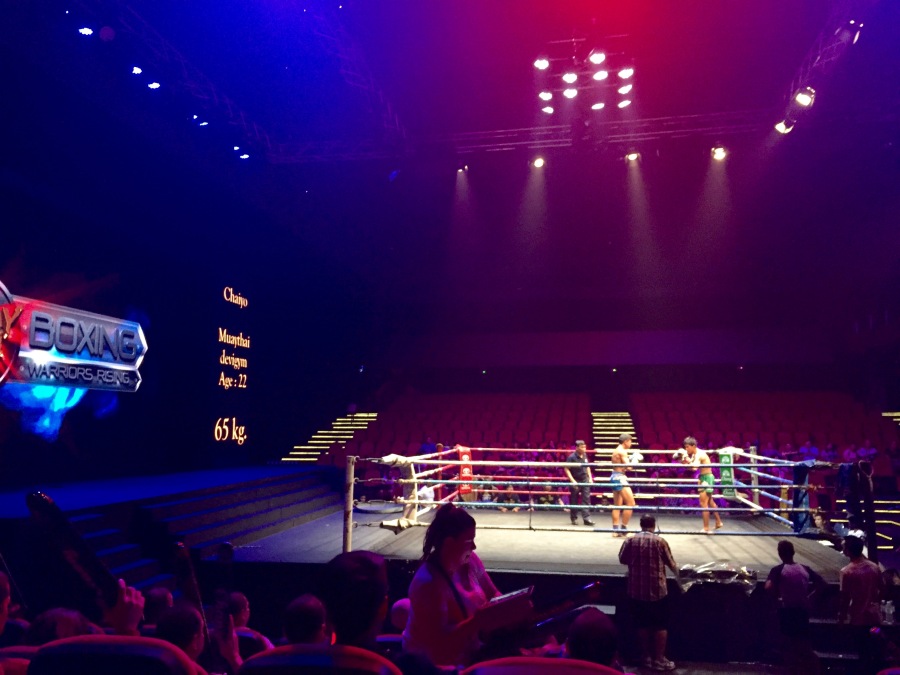 No visit to BKK is complete without Khao San Road, also known as “the centre of the backpacking universe.” Expect multiple street vendors, dirty bars and grungy backpackers. And watch where you walk… As I was leaving one, what seemed-sanitary, bar a decently sized cockroach fell from the roof onto my shirt. Calm, cool and collectively I removed the beast, or at least that’s how I remember it. So just be warned there are some creepy crawlers in the vicinity.  Whether you are in the mood for live music, sautéed scorpions or billiards, Khao San Road has it all.

It might have come out in my tone that I wasn’t entirely impressed with BKK. It certainly comes to life at night and there’s plenty to do of which we didn’t. But I can’t imagine a trip to Southeast Asia and spending more than a few days here. After day two I was more than ready to head North and find me some elephants.